This is a guest post from Thomas Sommer from AppLift.

Mobile ad fraud represents one of the most daring challenges for mobile marketers today.

According to White Ops, ad fraud cost digital advertisers well over $8.6 billion in 2015. Another study, which AppLift conducted together with leading fraud detection solution Forensiq at the end of last year, indicated that 34% of mobile programmatic traffic is at risk of fraud.

Ad fraud is an important issue: beyond stealing money away from mobile marketers, who are already struggling with high acquisition costs and user attrition, it also slowly undermines trust between the players of our industry, resulting in additional costs for everyone involved.

What Is Mobile Ad Fraud?

One of the largest issues with ad fraud is its diversity as well as its capacity to evolve and go under the radar of the latest prevention mechanisms. Luckily there are ways to establish a typology of fraudulent forms and classify them along clear lines. We developed mainly two broad ways to address fraudaxes.

The first way to look at fraud is by breaking it down into two main categories: technical fraud and compliance fraud. Technical fraud is rather self-explanatory, as it’s any trick aimed at technically faking an advertising event, such as impression, a click, an app install, etc. Compliance fraud is any deceitful tactic aimed at bending or breaking the rules enforced on a platform.

The second way to break down ad fraud is by looking at where it happens along the user conversion funnel, from impression to post-install event. Since the goal of ad fraud is to simulate or deceivingly emulate an advertising event, fraud is most likely to be perpetrated at the stage that the advertiser is paying, or optimizing, for. For instance, on mobile real time biddingRTB, advertisers generally pay per impression (CPM), and therefore fraudsters are most likely to focus on impression fraud.

Here are a few examples along those two lines: Generally, fraud fighting requires the combination of technology, data, and people, and can take place at three different stages: prevention, detection, and reaction. From this theoretical matrix we developed the following fraud-fighting table: 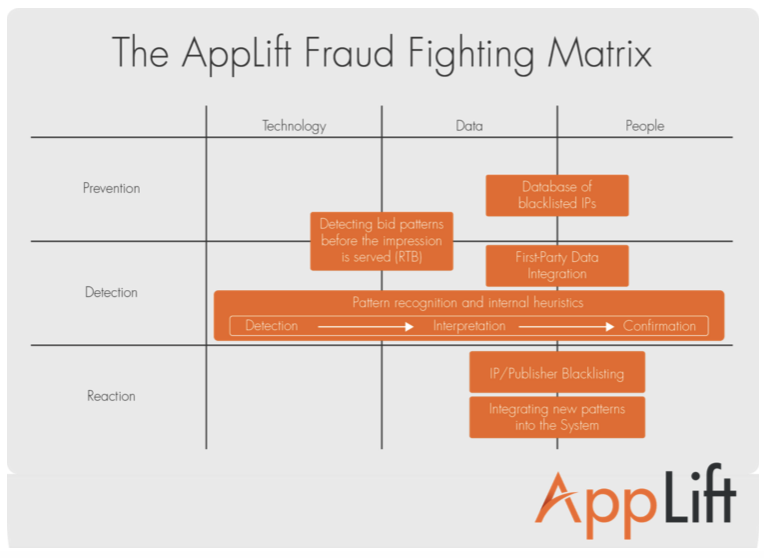 Pattern recognition and heuristics are the cornerstone of fraud fighting, both for technical and compliance fraud. For the former, fraudulent activity is generated with the help of more or less sophisticated bots. As much as bots can mimic the behavior of human beings, there comes a point where they can’t hide their true nature and start revealing suspicious patterns. For instance, an important number of clicks coming from the same IP address, unusually high conversion rates or abnormally high levels of post-install events coming from a single publisher are almost systematically red flags. On the compliance side of fraud, patterns can also be of help. For instance, with click stuffing (see table above), you can see that the time between the click and the install is significantly longer than for usual traffic.

The main advantage of real-time bidding (RTB) media buying process is that it enables a buying decision at the impression level, ie.. for each individual user. With the right technology, this allows “listening” to programmatic bid requests without the need to bid on them, thereby detecting fraudulent patterns before the impression even gets served. The learning curve and associated costs are therefore considerably reduced for mobile advertiser.

Onboarding first-party data, such as post-install behavioral events, can be of great help in detecting fraud, especially the technical kind. As it becomes harder to fake human behavior as you go up the user conversion funnel (see point 1), post-install data gives give greater insights into fraudulent patterns.

For example, if you are running a CPI campaign but see that the users coming from a given source have no or significantly low post-install in-app activity, that particular source can be flagged as fraudulent. Even for programmatic traffic and branding campaigns, looking at click and, when possible, at install and post-install data can say a lot about the traffic you’re receiving.

Once a publisher or a specific IP has been identified as fraud-likely, there is the possibility to add it to a blacklist “for future reference.” All IPs belonging to the same hosting provider could then also be blocked post-install (after verification). This post-detection precautionary habit can then serve as a prevention mechanism and save advertising dollars in the future.

If curating your own blacklist is paramount, the ideal solution would still be to benefit from an industry-sourced, neutrally maintained, general blacklist that everyone could access, at the condition that they also contribute to it. This is for instance the case in the online video advertising industry and we should fight to make it happen for mobile

Ad Fraud, as with all types of fraud, will always remain a game of cat-and-mouse and there’s little hope it can be eradicated completely. However, helping to raise awareness across the whole industry and having all stakeholders take steps to fight it would be a great start. If we can argue that the mobile ad industry is still in its infancy or maybe its teenage years, taking concrete steps in this direction will certainly be a decisive factor to bring it into adulthood.

For a more in-depth study on mobile fraud, check out AppLift’s report Fighting Mobile Fraud in the Programmatic Era.

AppLift is part of the TUNE Certified Partner Program, a program designed to give marketers more visibility into advertising partners that best meet their needs and adhere to mobile advertising best practices.