Everyone loves a discount, especially when it’s easy to redeem. Just ask anyone who contributed to the roughly 37,000,000 searches for “coupons” on Google last month. And because coupons are in such high demand, there are hundreds of sites who want to help you along your bargaining adventure. Many of them will be the familiar names you recognize well – RetailMeNot, Coupons.com, FatWallet and the like. But lurking just around the corner is a whole host of other, let’s say, less polished sites.

Most of these sites are entirely harmless, but there’s a particular segment of them with more questionable motives. In order to get their payoff, these shady sites rely on shoppers letting down their guard as they frantically hunt for bargains. They also operate quite differently from their more established competitors. While your traditional coupon site will monetize itself through affiliate relationships with merchants or on-site advertising, these less-sought-after sites have developed a number of more invasive (and potentially illegal) ways to turn a profit.

Probably due in part to these underhanded techniques, you’ll notice that these sites don’t tend to rank highly in organic search results. They rely on paid search advertising to generate the throughput of traffic that they need. Luring in coupon searchers with false discounts and misleading ad copy, they bait a variety of consumer traps. The end game varies, but is generally to make the user take some sort of action—such as filling in their email address, downloading a piece of software, or giving out their phone number. It should be noted, however, that none of these strategies focus on the user actually making a purchase at the merchant’s site. Instead, these sites bid on brand-specific keywords (e.g. “Macy’s Coupons”) without contributing incremental traffic to the brand’s site.

So what do these sites look like? And how do they make their money? During the past few weeks, we investigated by monitoring over 50 of the most popular coupon-related keywords across all of the major search engines. We’ll dig into some of the more interesting results below.

Don’t Be Fooled By the Friendly Face, Coupon Cathy Just Wants to Charge Your Phone Bill

Through our regular monitoring at BrandVerity, we’ve identified a number of mobile recurring scams in the past. The basic setup is to get the user’s mobile phone number via a form (usually by suggesting that the user will get their coupons once the form is filled out). Then the scammer charges a monthly fee to the user’s phone bill, acting as some sort of ringtone service or other added charge.

When you get to the landing page from Coupon Cathy’s ad, you’re presented with the same enticing offer: up to 50% off at Old Navy. And it’s a Coupon Cathy Exclusive to boot! Plus, the familiar “Success Meter” that’s so often featured on other coupon sites shows 100%. That’s certainly enough to convince a decent number of fast-acting coupon searchers to click through.

But when you actually go ahead and click on the “Get Coupon” button, you’re not taken to the merchant site. Instead, you end up on a page that requests some personal details from you: name, email and mobile phone number. It’s probably worth noting that the site explicitly asks for the mobile number, rather than just a general phone number.

This page also seems to be hidden from users who navigate to the page through something other than paid search. When we tried going directly to the landing page, the “Get Coupon” button simply took us to a page of Old Navy deals. But when we used the Google ad click URL to navigate there, the mobile prompt came up. That certainly appears to be an attempt at circumventing detection by suspicious investigators. 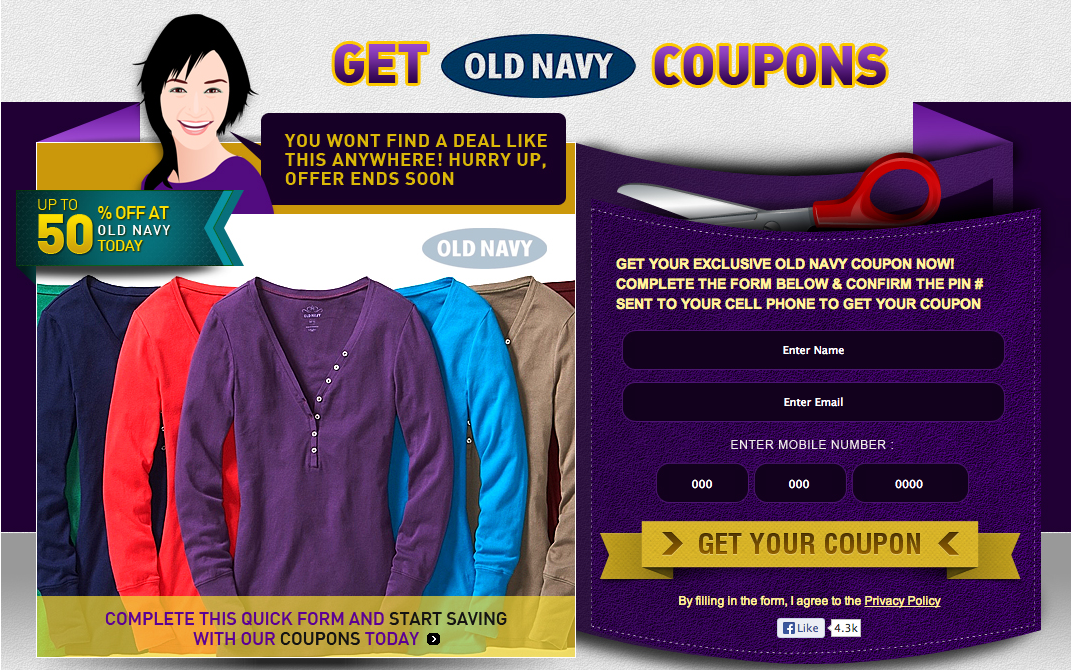 But what evidence do we have that Coupon Cathy is actually charging these mobile numbers? Well, some quick research returned a number of complaints by people claiming to have been scammed with the exact scheme we’ve identified above. This complaint on Webutation.net and another on ComplaintsBoard.com definitely suggest that something questionable is going on here. And if that doesn’t convince you, you might also want to check out Coupon Cathy’s Facebook page. It has over 4,300 likes—and yet it’s never posted a single update before. Very suspicious. Those likes were almost certainly purchased to trick visitors with false social proof.

Should You Trust a Site without a Homepage?

Another site, Coupon-Fire, seemed to follow a similar pattern. They request the same information: name, email, mobile number. But their site is even less transparent than Coupon Cathy’s. Once you click their ad, you’ll end up on a landing page with little more than a form, headline, and image of a particular brand. 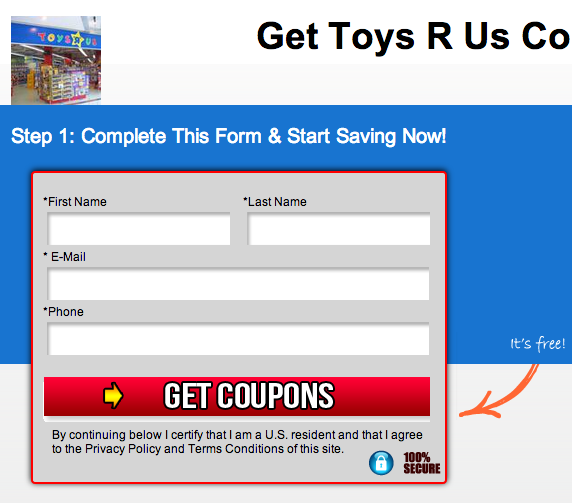 Plus, the landing page only links to two other pages on the site: the Privacy Policy and Terms & Conditions. And if you try to find some reassurance on the coupon-fire.com homepage, you won’t find any additional information there either. That’s because when you load it, nothing shows up! Feel free to try it for yourself.

So is Coupon-Fire engaging in the same scam as Coupon Cathy? Possibly, but we’re not as sure. While the lack of a homepage certainly raises eyebrows, there were no concrete reports of users being scammed by the site. It’s just as likely that Coupon-Fire is engaging in a less devious, but similarly frustrating scheme.

“You understand and agree that if you submit a request for a product or service offered through the Service, reg.coupon-fire.com will share your personal information (such as your full name, address, e-mail address, social security number, telephone number, and any other information you provided or permitted us to obtain and disclose) with any Clients in our network…”

The good news: not all coupon sites that ask for your mobile number are going to charge you for a bogus ringtone service. Then again, the bad news: these sites may expose you to telemarketing calls, email spam (if you provide an address that you actually use), and other unwanted solicitations.

Another site we identified in our research, couponexcursion.com, asked for the exact same pieces of information in its form. And instead of scamming visitors with mobile bill add-ons, it seems that they simply sell that information to marketers (based on one of the comments on 800 Notes, a reverse phone number lookup site). Interestingly, after digging a little deeper, we also found that Coupon Excursion’s privacy policy uses the same wording as Coupon-Fire’s. They’re almost certainly related—so we’d expect Coupon-Fire to monetize in a similar fashion by packaging and selling the information it collects.

Nostalgic for those carefree days of 2003, when Internet Explorer was king and you could hardly find of a version of it that wasn’t bundled with an interrupting add-on? Well, we’ve got the perfect escape down memory lane for you! A good number of the coupon advertisers that we turned up were promoting toolbar downloads. 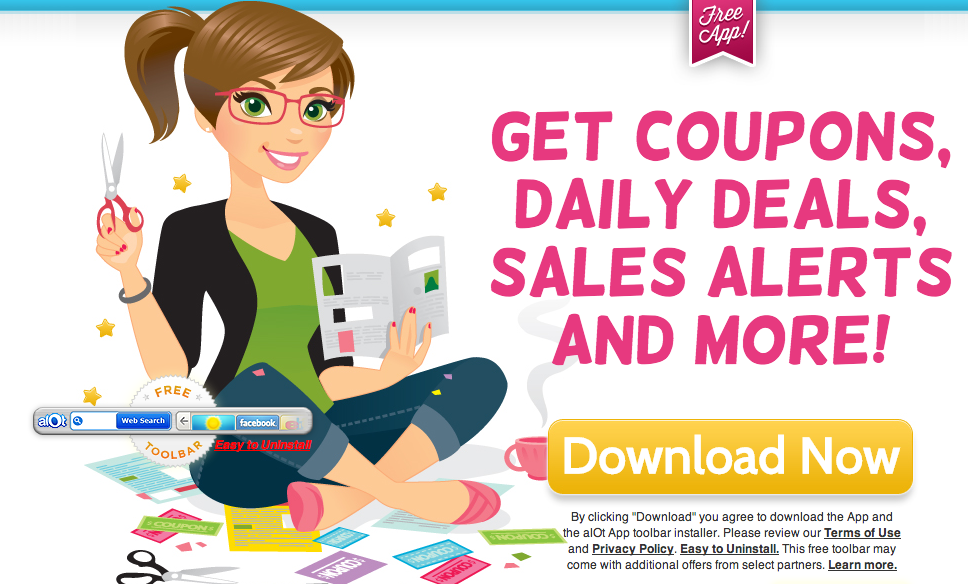 Most commonly, we found the following three showing up: CouponXplorer, CouponAlert, and the ALOT toolbar. On the landing page for the ALOT toolbar shown above, it’s important to note the disparity in visual attention given to the headline on this page versus the toolbar itself. It’s pretty clearly trying to distract users from noticing exactly what they’ll be getting.

Of course, toolbars also come with privacy risks and potential encroachments upon the user experience. We can’t speak for certain about all of the toolbars involved here, but we do have a fair amount of knowledge from the toolbar research we’ve done in the past. In that research, we observed some questionable behaviors by the ALOT toolbar—including auto-redirects through affiliate links in organic and paid search.

For consumers, the main takeaway here is to be extra wary of the ads that come up when you search for coupons. If you do happen to click on an ad, remain cautious about sharing any personal information. Maybe you’re not too concerned about the risks of email spam, but giving away your mobile number can provide bad actors with a direct path to your pocket.

As for brands, we always recommend keeping a watchful eye on your coupon-related keywords. Coupons are a very popular consumer search, so they’re a primary target for brand abusers. And since most brands don’t target their coupon terms in SEM or SEO, it’s easy to forget to check up on them. At the very least, we recommend doing some manual research on a few of the major engines.