It’s no secret that China has become one of the world’s leaders in mobile ad spending.

The country is the world’s largest smartphone market—approximately a quarter of the 2 billion smartphones in worldwide circulation in 2016 will be in China, and 77 percent of the population will own a mobile phone. Deep pockets of Chinese app developers coupled with increased VC funding contribute to the prediction that mobile ad spending in China will reach a total of 22.1 billion USD (6.48 billion CYN) in 2016. The good news for partners (networks and publishers alike) is that a portion of this budget is being allocated globally, mostly in a few hot verticals, such as cross-border e-commerce (both Web and mobile), utility apps, and of course, mobile gaming. However, with great opportunity comes great challenges. The opportunity in China for performance marketers is clearly large, and those marketers who are willing to take the risk will reap the benefits. 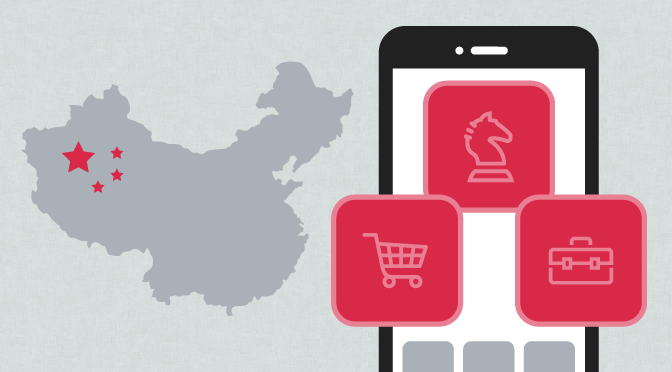 If you are like me and are a frequent visitor of celebrity gossip blogs, you may have noticed the abundance of pop ups from e-commerce giant Alibaba’s AliExpress. This is part of the concerted efforts by Chinese e-commerce players to scale to new heights by alluring mass amounts of users in foreign countries. According to the China Ministry of Commerce, China cross-border e-commerce will reach 1 trillion USD in 2016.

Due to China’s rising middle class and its newly-found thirst for foreign products, both China and foreign e-commerce sites are reaping the benefits. Alibaba competitor, JD.com, recently launched JD Worldwide, which offers Chinese consumers imported products from 1,200 brands, ranging from infant formula to designer bags. Alibaba offers its own version, which includes a total of 5,400 brands from 25 countries.

China’s internet ecosystem is generally closed to the outside world and is mostly dominated by tech giants Tencent, Alibaba, and Baidu. At the same time, these giants and other Chinese app developers, historically, have had little success penetrating markets outside of China. With a reported 60 percent of mobile ad spending being allocated toward the development of utility apps, China’s biggest app developers are looking to rewrite history, and they have gotten off to a formidable start.

These trends are definitely on the rise, as evidenced by start up companies such as APUS Group — an Android utility app company that has more than $116 million in funding and 150 million users.

China has a very large mobile gaming industry. How large is large exactly?

GMGC has predicted that China will reach 7.7 billion USD of revenue in 2016, finally surpassing the U.S. at 7.3 billion USD. Major contributing factors to this upward surge are a large population of mobile gaming consumers (420 million), and ones who are spending 35 minutes more playing mobile games than they do in any other app category.

Buyers Beware — What this means for Foreign App Developers

Here are a few points that scream “buyer beware”.

China’s increase in mobile ad spending presents some great opportunities for global marketers and partners to get a piece of the pie. Chinese companies looking to succeed should aim to push apps to international markets, with a focus on utility and gaming apps. 2016 is approaching fast, and many will see for themselves if the risk is worth the reward.