We studied the top 50,000 apps on iOS and Android, including billions of ratings, reviews, and bits of metadata to find what’s different about top-ranked apps.

Get our full free report here.

App publishers who want to win in installs and engagement, the ultimate goal, must first win in search. Click To Tweet

There’s a good reason for the dominance of search: people are extremely task-focused when installing mobile apps.

Not only are Google Play and the iOS App Store very often the first place users recall seeing apps that they install, smartphone owners typically approach app discovery like a job to complete as quickly as possible.

When we asked over 3,000 smartphone owners why they had downloaded their last few apps, 37% of them said they had a specific task to accomplish. Another 13.5% of them had searched the web for something they wanted, and Google had returned the app as a result. Put those two together, and you’ve got about half of app installs resulting from purposeful, intentional, directed search.

So you’ve got to win search. But how?

If you want to be a top app, you have to win at Google Play’s and the App Store’s ranking algorithms. That means a lot of things in terms of app store optimization, but ultimately it means you need to rank for a large number of keywords that people search for. On average, top 10 apps rank for a lot of keywords:

Android has a longer tail than iOS, for two reasons: there are more apps available on Google Play, and Google has traditionally been more sophisticated at crawling and indexing content, and at returning search results, so more apps rank for more terms. Apple, in contrast, relies more heavily on developer-provided content such as app titles and iTunes Connect keywords, which limits the diversity of terms an app can rank for.

You can see the long tail here:

If you want to rank in the top ten apps in your category, you can’t just rank for many different terms, you have to rank first, second, or third for a lot of those keywords. This is the core challenge not for apps that are forgettable, way-out-of-contention efforts thousands of positions from the top in their category, but apps that rank 140, 152, or 137 in their category.

Apps in the top ten get hundreds and sometimes thousands of times as many installs as these moderately successful apps, and it makes all the difference between pulling in millions of dollars of revenue each day or week, and pulling in maybe a $1M every two or three months.

This is the scope of the challenge: apps that want to challenge for top-ten spots need to rank for between five and eight times more keywords, on average. Of course, averages are nice to see, but of limited applicability for your particular app in your specific Google Play or App Store category. The real question is: how many keywords do top apps in my category rank for?

Top apps in the wildly competitive games categories rank for easily 200 keywords each. Photo & Video is also extremely competitive, and Social is tough too. But less popular and less trafficked categories such Books, Business, News, and Weather are comparatively easier to rank in, with top apps ranking for 25 to 50 keywords in most cases.

For iOS, the different category challenges look like this (get the Android chart here): 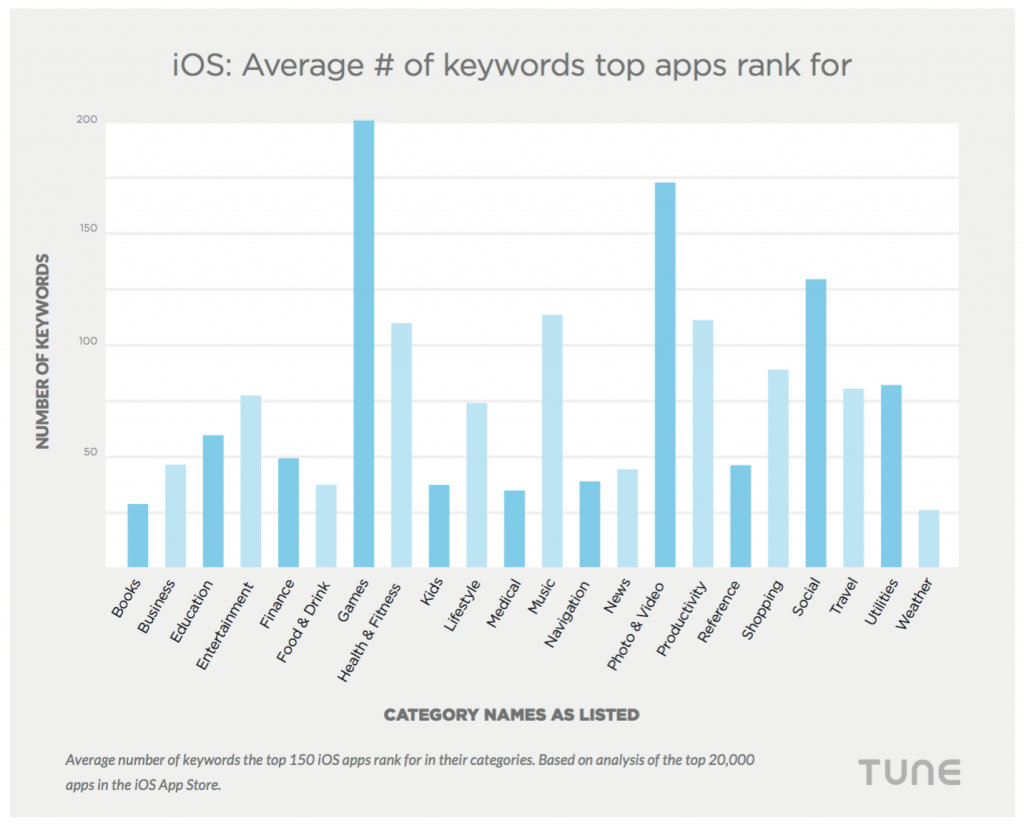 Within the massive games categories on both Google Play and the App Store, which house easily half of all mobile apps, similar principles apply: some categories are just much, much more competitive than others. Which is why you need to select your app’s category very, very carefully.

On Android, for instance (get the iOS Games subcategories here), Casual games are the most competitive, while Family, Music, Trivia, and Board games tend to be easier to rank in: The key is in knowing your competition, and playing accordingly. As TUNE app store optimization expert Patrick Haig says, taking your time is also critical.

“It’s important to realize that not all of your competitors may be equal, so don’t target your most popular competitors at the outset. Take a graduated approach to keyword targeting and optimization, and as your downloads and user engagement increase, you’re likely able to graduate to more competitive (and often higher volume) keywords.”

Clearly, there’s a lot more involved in app store optimization than just ranking for keywords. Keep your eyes out for more research on this from TUNE … we have about ten reports on the topic that we’ll be releasing over the next few weeks.

For now, you can get our full and free report here.