Over the past several months a number of major players in the mobile marketing space released new mobile app install ad formats designed to simplify the user experience and encourage more app installs.

Considering that global mobile ad spend jumped 105% in 2013 and is projected to increase another 75% in 2014, the need to continuously innovate has never been more important. Full screen takeovers and out-of-place banners may have played a role in the past, but for app developers and marketers tasked with continuously acquiring new users, the updated ad formats are a welcomed addition.

Learning about the emerging mobile ad formats discussed below can help you stay abreast of industry trends and ensure your efforts to acquire new users are utilizing the most advanced tools and resources on the market today.

The new suite includes card-based ads that leverage the best of Twitter Cards and Promoted Tweets to deliver a quality native ad experience. These resources give users the ability to easily install and engage with mobile apps directly from their Twitter Timeline. As seen in the example below, the ads include the app name, icon, description, space for other key characteristics like rating and price, and a download button that connects users directly to the App Store or Google Play. 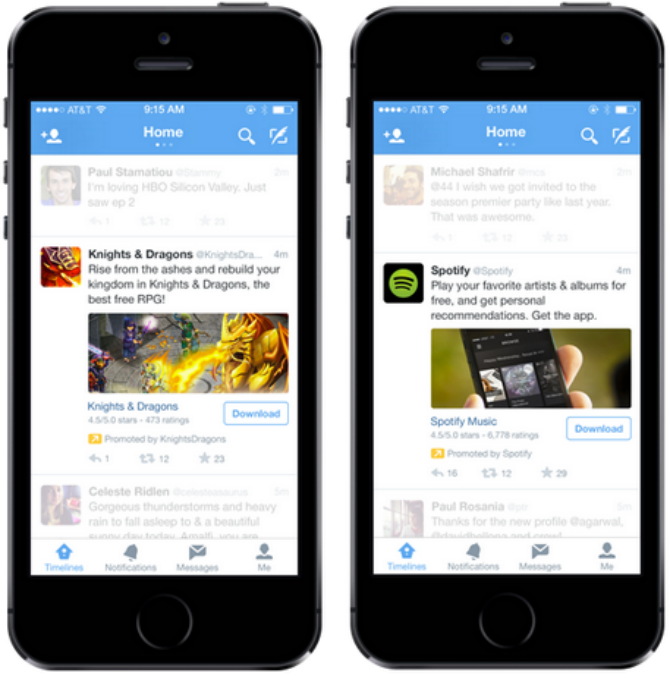 One of the major benefits of native design is that ads have a look and feel that is not disruptive to the user experience. And through the MoPub Marketplace, marketers are able to serve targeted ads with the built-in download functionality to more than 241 million active users on Twitter – as well as more than 1 billion mobile devices off Twitter – all through one central interface.

Google believes that people are much more likely to download an app if they see it in the right context. Utilizing user information that is already on file (i.e. the apps users have installed, the frequency of use, and the types of in-app purchases), Google is able to serve targeted ads and drive mobile app installs.

To illustrate, Google provided an example of a user that consistently uses an exercise app to measure the distance of a run. When conducting a search, this user might see an ad for an app that helps measure the caloric intake of the user’s diet.

The mobile app install ads also have major implication for re-engagement campaigns. When a user conducts a Google search on a mobile device, the search results will display ads for apps that the user already has installed on their mobile device.

For example, if a user conducts a mobile search for “hotels San Francisco” and already has the HotelTonight app installed, at the top of the search results would be a HotelTonight ad, with the option to open the app with one tap. 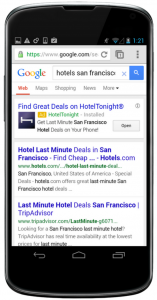 Utilizing deeplinking, the user would then be taken to a specific screen in the HotelTonight app about San Francisco hotels, instead of being taken to a generic landing page.

A recent study examined data from the first quarter of 2014 and found that video and native ad consumption was on the rise, while other forms of advertising had leveled off relative to the previous quarter. The same study found that play rates and video completion are higher when they are shown in-app versus on the mobile web. These findings indicate that not only are video ads being used more often, but they are increasingly successful at capturing and keeping the attention of users.

As video ads become more prominent, emerging formats are streamlining the user experience and making it easier than ever to install mobile apps.

For example, as part of the announcement mentioned previously, Google also unveiled intentions to offer app install functionality to video ads. Details were not disclosed, but it appears that mobile app install ads could be associated with the pre-roll ads that are already shown at the beginning of many videos on the YouTube platform.

A screenshot from the presentation (seen below) shows the install button placed in the corner underneath a pre-roll ad. 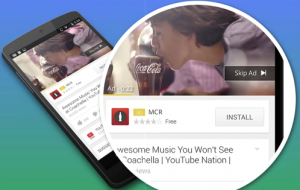 For users that already have the advertised app installed on their device, the “Install” call to action would be replaced with “Open,” which again, provides a major opportunity for re-engagement.

Mobile app monetization company Vungle, recently rolled out Vungle Exchange – an ad exchange built from the ground up specifically for in-app video ads. This includes a patent-pending predictive algorithm that serves the most relevant ad to each user and the ability to optimize between app install ads and brand ads.

Native ads are specifically designed to mimic the look and feel of the content surrounding the ad and are meant to be as non-disruptive to the user experience as possible. Native mobile ads often have a simple structure and may only consist of an icon and a brief description.

Native ads have become particularly prevalent in social media, primarily due to their impressive click through rates (CTR). According to an AdRoll study of Facebook campaigns from nearly 550 advertisers, native ads within Facebook news feeds obtained a CTR that was 49 times higher than “right-hand-side” ads, and came it at half the cost per click.

The image below utilizes Appsfire technology and provides a good example of how native mobile app install ads can work.

When a user taps on an ad, a replica of the App Store page appears and the user is able to download the app directly from that screen. Native mobile app install ads like these help drive user acquisition and streamline the user experience by eliminating steps in the conversion process.

Considering the context where an ad is displayed is an obvious factor that influences clickthrough and conversion rates. Contextual advertising has long been the standard for marketers on the web – as aligning ads with relevant site content increases the probability of reaching the intended audience.

Yet in the mobile world, matching ad inventory to the content in a mobile app has been challenging (partly because mobiles apps are not crawled and indexed like the web). Consequently, mobile marketing campaigns are often optimized only for a specific app (or group of apps) where conversion is already known to be high. In addition, a user’s ability to discover new apps is often limited to the trends in the App Store and Google Play.

Companies like Berlin-based app search engine XYO, are aiming to solve this problem through contextual mobile app install ads. XYO leverages behavioral and social data in an app search context, enabling them to identify app preferences and deliver targeted, contextual ads at the precise moment a user is looking for it.

Do you plan on utilizing any of these new ad formats? Are there any other emerging formats that you think will make an impact? Let us know in the comments below.