After receiving access to Facebook Promoted Posts for the HasOffers Facebook page, we started experimenting with the impact. So far, the results are less than impressive.

If you haven’t tried Facebook Promoted Posts yet, they appear to be a way to simplify advertising on Facebook for people who might find it confusing. Instead of creating an ad campaign targeted to specific users, you simply choose a dollar amount you are willing to spend to get your post in front of more people who Like your page. You need a Facebook Page with a minimum of 400 fans in order to use Promoted Posts. Assuming you meet that minimum bar, you can click the Promote button under any recently created post and theoretically extend its reach.

Our first Promoted Post was about our new Director of International Sales, Aryeh Altshul, and his upcoming trip to a4uexpo in Barcelona. The post linked to the HasOffers blog. When Todd setup the Promoted Post, Facebook estimated a reach of 2,100 at a price of $30.

The post organically reached 821 people, had a viral reach of 393, and paid reach of 1165. Paid reach is what you’re charged for in a Promoted Posts campaign, so we only got 55% of the estimated reach. Maybe the estimation algorithm isn’t working yet? 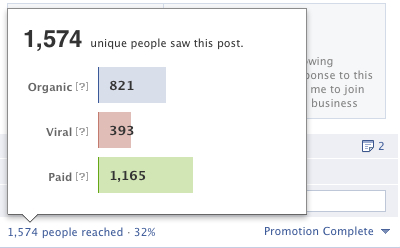 Total unique impressions for the post is 1574, which means some of the people we paid to get the post in front of are the same ones who saw it for free. I know both Todd and I saw the organic and sponsored versions on our respective Facebook news feeds, so we even paid to show the post to page admins.

We netted a total of 9 clicks to the blog from those 1165 paid impressions, along with 4 post likes and a page mention. Those 9 clicks net out to $3.03 CPC for anyone keeping score. Post likes and mentions might help get us in someone’s news feed in the future, but those have nebulous value.

At the time we ran our first Promoted Post campaign, we also setup a Facebook Ads campaign for the same topic. You can see the ad we ran in the image to the right. The ad linked to the same post about Aryeh and a4uexpo on the HasOffers blog. Coming as close to matching the same timeframe as the Facebook Ads tool will let me, I find that our ad reached 4,902 people. The Facebook Ad cost $0.64 CPC.

The ad was specifically targeted at people in European countries who like affiliate marketing related topics, so maybe you could argue the ad campaign was destined to do better. The Promoted Post was shown to anyone who Liked HasOffers, which should make them fans of the company and more likely to care about what we’re up to.

Promoted Posts also failed to deliver within what I would consider a normal variance for estimating reach. The Promoted Post campaign promised an estimated reach of 2100 people for $30.00. Facebook came pretty close to collecting the full $30, with the campaign closing out at $27.28. They overestimated advertising reach and delivered a mere 55% of the paid impressions. Our other two Promoted Post campaigns are also failing to reach anywhere near the Facebook estimates.

Could There be Benefits to Running a Promoted Post?

At the same time we were testing Promoted Posts on the HasOffers page, I ran a test on my own Facebook page. I update it infrequently, so I thought it might be a good test of re-engaging a page. My page only has 785 Likes, so it’s a small population. Facebook estimated a reach of 500 people for $5. The net result was 340 organic views and 292 paid views, for 391 unique views. The actual paid reach in my case is 58% of the estimate. I got 2 clicks to the blog post I featured for a $2.13 CPC, which is still considerably more than a targeted Facebook Ads campaign.

Have you tried Facebook Promoted Posts? Is it meeting your expectations or are Facebook Ads more effective?