Scientists in Antarctica are downloading mobile games. Parents in Syria worry about kids using too much tech. Islanders in American Samoa connect with 4G, and sherpas in Nepal chat on their smartphones while lugging 75-pound loads.

The mobile economy is reaching a global tipping point.

In other words, it’s not just the traditionally rich, developed nations anymore. In 2015, 800 million people joined the smartphone generation, according to Ericsson, bringing the global ownership rate to 47%. In 2016, 600 million more will join the club, pushing smartphone penetration to well over 50% globally. 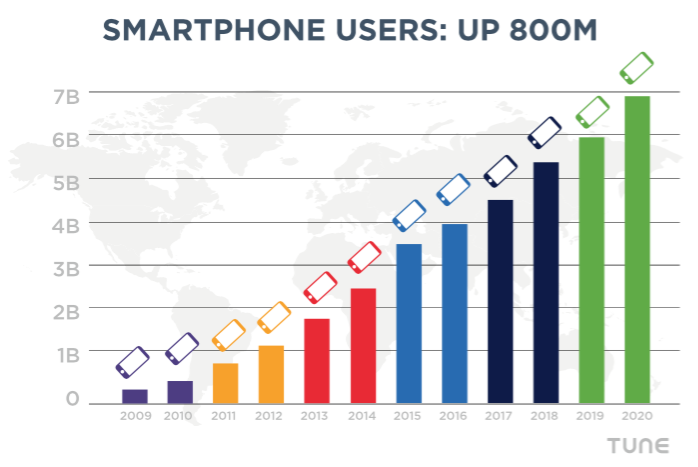 Global mobile users will reach almost 7B in 2020. Data from Ericsson and TUNE forecasts.

This is the most significant event of our times, because the smartphone is the personal device — in fact the most personal device ever. Because of that, it’s the everything device: the communicating, gaming, learning, buying, reading, watching, tracking, and remote controlling device.

(Get the full free report: Global Mobile: Why 2016 is the Global Tipping Point for the Mobile Economy.)

To understand more about where 2016 is going, we analyzed 400,000 gigabytes of mobile marketing data from 249 different countries, autonomous regions, and other areas. (The U.N., by the way, only recognizes 206 member nations.)

The results are astonishing. 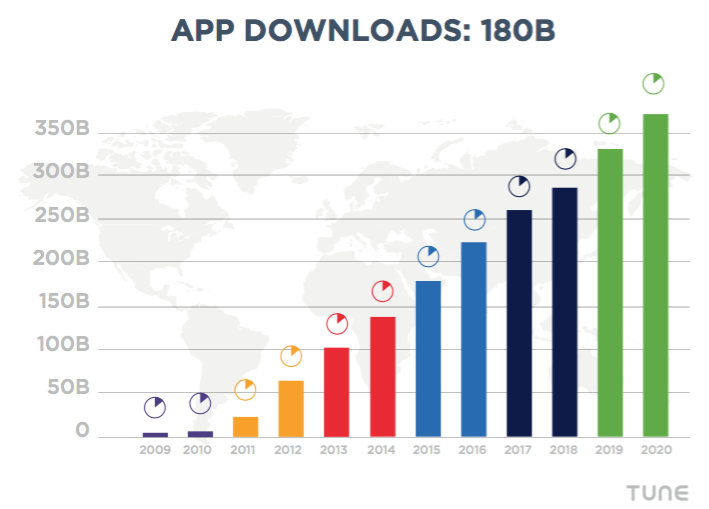 Conservative estimate of 2015 app downloads: just under 200B. Data from Statista and TUNE.

In 2015, we downloaded almost 200 billion apps — estimated conservatively. That’s frankly lower than where global downloads could have been, but we’ve seen a significant slowdown in per-person downloads in developed, mature mobile economies such as the U.S.

In fact, the most common number of monthly downloads per adult smartphone user is zero. That’s a challenge for mobile marketers generally, and brands in particular. Traditional brands have arrived later at the mobile economy party than startups and mobile-first gaming companies, and have a lot of catching up to do in an era when developing a strong relationship with your customer means being pocket-worthy: worthy of being installed on the three-foot device. That privileged position on the smartphone does result, however, in huge value.

(GameStop, for instance, told me that its app-using customers are worth double their highest-value loyalty club customers.)

The BRIC nations — Brazil, Russia, India, and China — have long been tapped as sources of the world’s greatest future growth. We’ve seen that already, particularly in China, a massive mobile economy, and India, a naturally mobile-first country.

But the continuing acceleration is astonishing and transformative.

Over the last 12 months, we’ve seen double the number of installs in BRIC, and BRIC now comprises more than a quarter of our business activity. The mobile minutes have been on the rise for years; now we’re seeing economic activity follow the activity … something that marketers, developers, and brands have been eagerly anticipating. 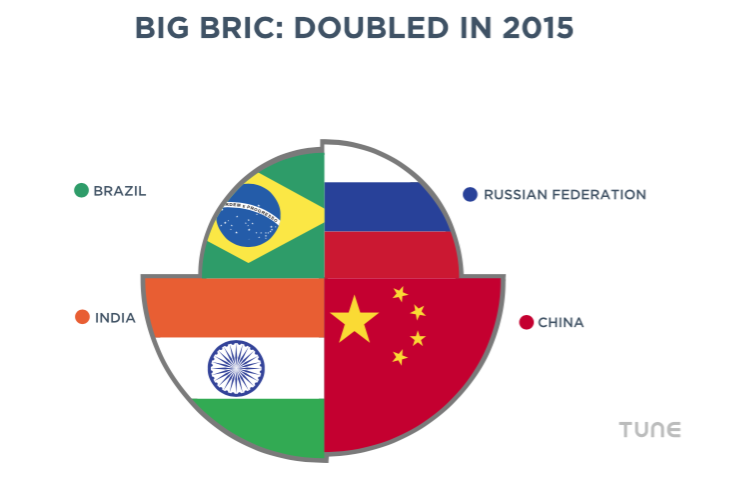 BRIC mobile installs doubled in 2015, according to TUNE data.

One of the benefits of measuring the massive amount of data that TUNE sees is the ability to see where markets are moving. By analyzing literally hundreds of billions of marketing actions, it’s clear where the mobile economy currently sees value, and where that value is moving.

While it’s a very unusual company with a billion-installs app — think two companies, one in social etc. and one in search etc. — there are many more app categories with massive and significant interest.

In fact, there are 16 app categories that we track well over a billion clicks in. Most of them are game related — 56% of them, in fact. That includes the obvious: arcade games, RPG games, and casual games, but also card games, strategy games, and word games. 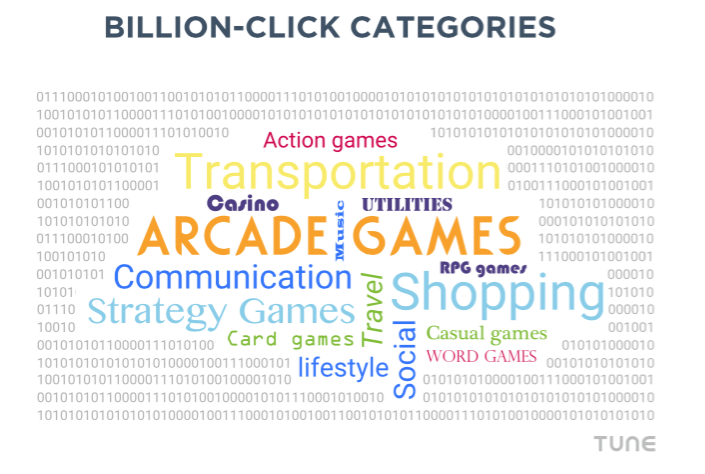 But the emerging categories highlight the direction the new mobile economy is moving.

Those include transportation: think Uber, Lyft, Bla Bla Car, Ola, and others. There’s music, of course, with Pandora and Spotify and Songza, Beats, Guvera out of Australia, Saavn from India, and iHeartRadio. There’s communication and messaging, with platforms such as LINE, WhatsApp, WeChat, and Chaatz.

We’ve all heard that FlipKart is massive in India. And that 70% of the company’s revenue is from m-commerce. What’s most interesting about India is that the country is mobile-first by default: people have largely skipped the Western world’s desktop/laptop phase and moved straight to smartphones. 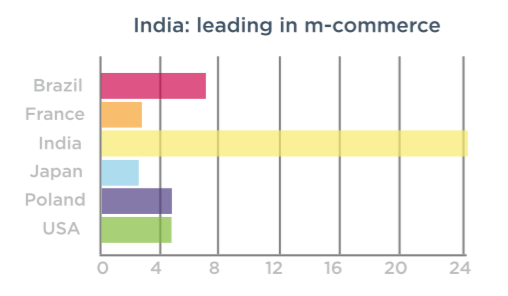 India has a very high percentage of m-commerce and shopping app downloads.

That’s an indicator of the future, as people in Western nations are following suit.

As we’ve seen from Kleiner Perkins and eMarketer data, time on mobile is eating time on desktop and laptop devices, and 2015 was the crossover point when U.S. adults began spending more minutes/day on mobile than on traditional computing devices.

Paid installs are important in fast-growing and competitive categories, but organic installs are both more numerous by far and more cost-effective. They’re not free, obviously — you do a lot of work to grow them — but as TUNE’s Ian Sefferman says, they have the advantage of a marginal cost of $0 each, and therefore they also scale much better than paid. 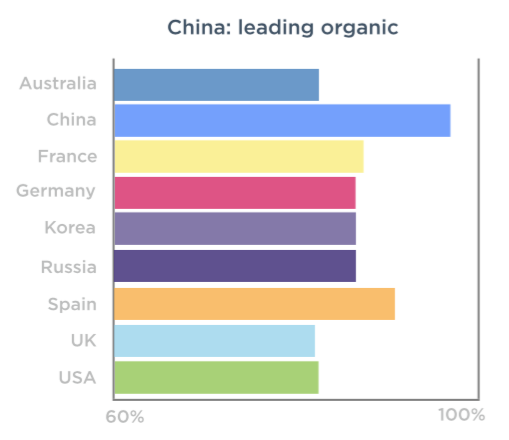 China leads all nations in organic installs, according to TUNE data.

China leads all countries in organic installs, with 96% of installs in China being organic. The global average, according to TUNE data, is 90%, while countries such as the U.S. at 84%, France at 89%, and Spain at 94%. Interestingly, there are differences between iOS and Android for organic, with China Android installs at 94% organic but China iOS installs at 98% organic.

But it’s not about big

There’s tons more in the full report about the U.S., about other nations, and about the big global numbers. But one of the most important things to recognize is that it’s not about big. One of the extreme dangers of mobile marketing is that we get hypnotized by the millions and the billions, and forget that change, progress, and reinvention happen one action at a time, one person at a time, one device at a time. 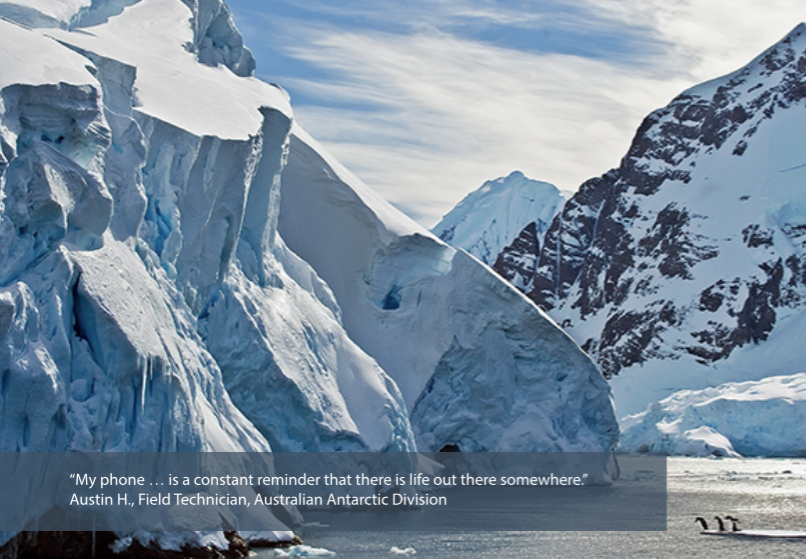 The mobile economy has even reached the icy desert of Antarctica

That’s why we talked to people in Antarctica. People in war-torn Syria. People from American Samoa. And people who have lived in Nepal, Isle of Man, and other isolated, sometimes-forgotten places on the planet.

We lose perspective on mobile when we just focus on the big numbers.

Yes, they’re amazing. Yes, the growth is almost incredible. Yes, the pace of change is breathtaking. Yes, mobile is the fastest and most impactful technology revolution in history.

But it’s critical to remember that the reason for the big numbers is rooted in small, focused, local, and most particularly personal experience. The fact that each of us can connect to almost anyone on the planet with a device we hold in our hands. The fact that we each can have a supercomputer in our pockets. 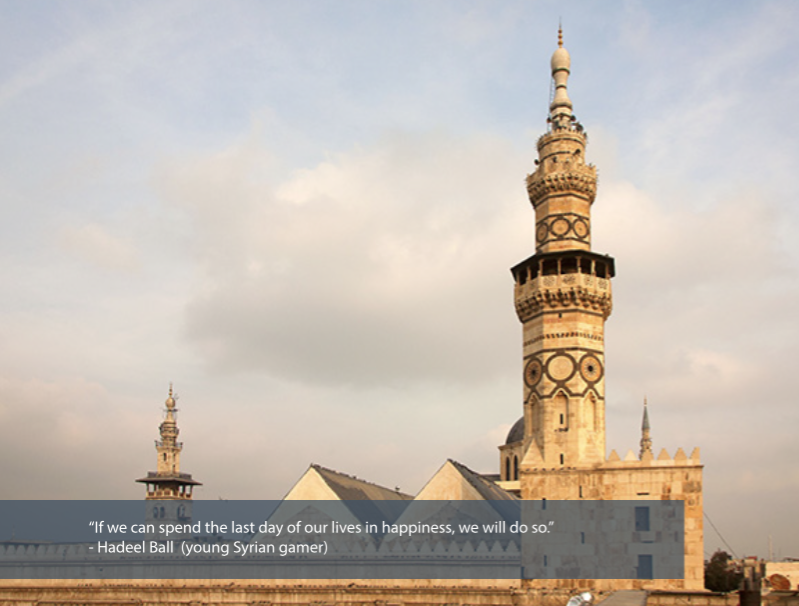 A poignant thought from one of the Syrians we talked to about smartphones and mobile.

Get the full free report here: Global Mobile: Why 2016 is the Global Tipping Point for the Mobile Economy.