This is a guest blog post by Eugine Dychko from global mobile app marketing agency ComboApp.

Word of mouth is much more effective than direct advertising. Ask yourself this question: Would you be more inclined to download an app after your friend recommended it or after you saw it on a banner ad? Virality is not a primary factor in an app’s promotion strategy, but it makes user acquisition significantly easier and faster. More importantly, it helps app developers save money by decreasing the cost of user acquisition. While the cost of acquiring a loyal user recently reached $4.14, virality lowers marketing spend and promotes an app for free.

Virality requires a detailed strategy and can’t be limited to a couple of sharing buttons inside an app. Want your app to go viral like a popular meme? ComboApp has gathered all of the essential information on app virality to enable users to market an app for you.

Create Something Worth Sharing

People share things that drive value, evoke emotions, or seem to be extraordinary. Does your app offer something interesting or valuable? Will users want to share content or personal accomplishments? Make sure to create shareable moments that users will share on social media and directly to friends. Despite the category, an app can contain some helpful information for the user.

Engaged and loyal users are more likely to share an app. The simple app 2048 last year hit 10 million unique visitors in a month and became an addictive game that went viral. It created a challenge between users and made them spend hours playing and share results with their friends.

The more users become engaged, the better a viral effect it can create:

The sequence that leads a user from installing an app to inviting new users is called a viral loop.

It’s psychology 101—positive emotions drive more shares, while controversial emotions lead to more clicks. Emotional arousal is one of the main reasons people share something. According to Jonah Berger, assistant professor of marketing at the Wharton School of the University of Pennsylvania, “Whether you’re selling soda, car insurance, or a presidential candidate, evoking emotion increases word-of-mouth.” 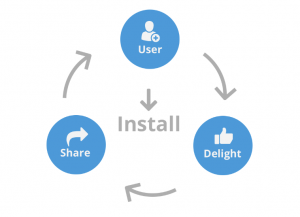 People also like to spread information that makes them look good or feel better about themselves (hello selfies!). Create an opportunity for users to achieve something they will be proud of and will want to share on social media. For example, the Runtastic app seriously benefits from users sharing. Twenty percent of their users share their workout activity on Facebook, leading to millions of impressions and organic downloads.

Sharing Buttons: When, Where, and Which?

To make the sharing process easier:

Add images and text to social actions. Images and messages will differ depending on the platform (formal for LinkedIn, friendly and relaxed for WhatsApp).

You know that feeling when using an app and the “find friends” bar haunts you on every page, making your in-app experience almost intolerable? Don’t do this to your users. Ensure smooth and pertinent sharing suggestions. Users should have full control of what is going to be shared. Tricking users into sharing may work short term, but they will delete  the app and leave you with negative app store reviews and a poor reputation. Remember the infamous Circle app? It was tricking users into inviting all of their contact lists and all Facebook friends in one tap. This spam invite strategy brought the app to the top charts in app stores, yet created an ugly image of the app on social media.

A referral program is a clear and effective virality tool. Not every company can afford to give a $25 discount for each friend a user invites, like Airbnb does. However, there are other ways of rewarding a user for an invite or share additional storage, a free upgrade, free additional features, or in-app currency.

It is worth creating two-side referrals when you incentivize both an existing user and a new user. A new user is more likely to download and use an app with the promise of a reward and an existing user will provide value to a friend.

In order to understand the efficiency of your strategy to make your app viral, it’s important to track the performance of share buttons and calculate a K-factor. This data will generate insight that will serve as a base for further adjustments. Having a viral app can lead to incredible results when embedded into an app’s core functionality, design, and features.

Have you utilized sharing buttons or a referral model in your app? Have you seen results? Tell us in the comments below.