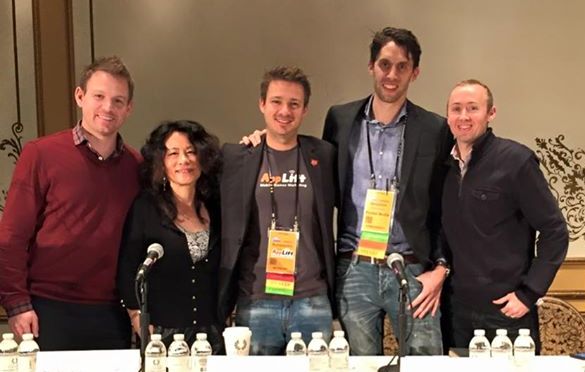 Last week, the HasOffers team was a Bronze sponsor at Affiliate Summit West in Las Vegas. It was a fantastic show, and we appreciate everyone taking the time to speak with us. As always, we enjoy meeting new faces, as well as connecting with dear friends, customers and industry peers.

Also, thank you to everyone who attended our panel, Mobile Marketing Secrets Revealed, led by our General Manager, Cameron Stewart. A huge thank you to our wonderful panelists:

I was fortunate enough to attend the panel, and was inspired by the discussions the panelists held about current and future trends in the mobile marketing industry. The key takeaways from the panel are summarized below. As always if you have any questions drop us a comment below.

Why are they going mobile

For the past several years, mobile (and apps in particular) have been driving the growth of time spent on digital media. In fact, a recent ComScore report shows that mobile app usage has increased by over 50% in the past year, while time spent on desktops has stayed relatively static.

Armed with this information, our panelists all agreed that they needed to be a part of writing the script of mobile advertising, rather than reading it, which is why they all got into the mobile space.

Benjamin Pomerantz of Pocket Media said, “Everything is shifting so quickly to mobile. You can target users and reach them directly in their pockets.” Shirley Lin from YeahMobi quickly agreed, saying “Especially in China, mobile is a must.” The smartphone is creating an incredible amount of demand, and in mobile-first countries like India, much of Asia, and Latin America, mobile advertising is imperative for successful campaigns.

Mobile as a differentiator

A key distinction is that the discovery of apps is unique to how users find things on the web. With this in mind, advertisers must rethink how they market to their target consumers and how a users’ purchase path is different on mobile. For example, a recent MobileDevHQ study found that 10% of iPhone users and 9% of Android users found the last app they downloaded through the Top Charts, making it the 4th largest download channel on both platforms (behind app store search, friend referral, and reading about it on the web). Loaded with this information, a wise mobile advertiser would create a strategy that involves a method of boosting their app to the Top Charts, such as engaging in a burst campaign (concentrating ad spend in a short period of time to draw in a large number of new users).

Our panelists also noted that high quality screenshots, creatives, and user experience are especially crucial in mobile advertising. Monitoring a customer’s in-app journey and seeing their reactions to different stages of your app gives you great insight on how to change certain landing pages or creatives. You must then use analytics to pinpoint when and how a user abandons your app in order to formulate the right optimization and re-engagement strategies.

Understanding local markets and the nuances in each of them is very important. Thinking through localization, varying cultural insights and other key factors plays a big part in the success of campaigns. Shirley discussed how they slightly tweak their creatives and messaging and then use real-time data to A/B test ads on sources such as Facebook to see which are performing the best on mobile channels. This is especially important when you are running global campaigns because you can see how variations perform in different regions of the world and adjust your campaigns accordingly.

Our panelists discussed trends they have observed in global mobile marketing over the last year. One insight people learned was, “India is huge for non-gaming apps since most consumers only own a mobile-first device and do everything through it,” says Konstantin Dieterle of AppLift. This trend is also seen in other emerging markets, such as Latin America.

Asia is highly fragmented with many language variations; keys for this market are to localize campaigns, as well as work to have a strong brand presence. One thing attendees learned was that employing the use of traditional channels, such as billboard ads, can help apps succeed because Asian users look for brand recognition when making mobile conversions.

Aside from cultural variation between regions, app verticals also have specific trends that our panelists discussed. Brands and utility apps tend to care more about impressions. The display and creatives are very important, and ultimately advertisers in these verticals place high significance on brand recognition and wide-scale promotion. Gaming apps care more about installs and click-through rates.

Benjamin made the interesting point that “In mobile marketing, most advertisers are also publishers.” For example, apps like Pandora have their own app that they advertise on various channels. However, they also display ads within their app for other advertisers, making them a publisher and an advertiser on both the supply and demand side.

Our panelists agreed that paying attention to local sources, such as varying social networks (e.g. VK in Russia) and search engines (Baidu vs. Bing vs. Google, etc), is critically important in optimizing their global campaigns. This also goes for ad units. “Always think about the cultural differences between regions when choosing your mobile creative,” advised Shirley.

Shirley also shared that she has seen very high conversion rates on native ads in mobile web platforms, as well as video, and that both of these units will continue to grow over the course of the year. All of the panelists stressed the importance of analyzing the data to see which sources and ad units are performing well in varying regions or across different devices so that you can make any necessary adjustments.

Finally, they shared an interesting way to bridge the gap between a traditional traffic source and mobile devices: including an event hashtag associated with a specific TV show in a paid Twitter campaign. When users start engaging with the hashtag on Twitter during the show’s airtime, your ad will appear on their Home Feed. An example given was advertising the Kim Kardashian app on Twitter using the hashtag associated with the “Keeping Up with the Kardashians” TV show while the show’s episodes were airing for the first time.

After chuckling about the many, many “learning lessons” that they had each encountered at some stage of their mobile marketing campaigns, our panelists were kind enough to share with us key things to avoid.