Guaranteed exposure to your existing Facebook page fans sounds like an obvious way to increase engagement with posts. People who like your page are theoretically interested in either your company or your market segment. While I can’t prove the interest level of an individual Facebook user, you aren’t guaranteed someone will pay attention to your posts and engage just because they liked your page.

In fact, there’s a good chance people who never liked your page in the first place will be more likely to interact than those who did. After comparing the Facebook Promoted Post performance to Facebook Ads, I found Facebook Ads more effective at driving engagement.

What’s The Difference Between a Promoted Post and a Sponsored Story?

Before I dig into the performance results of our Sponsored Story vs. Promoted Post test, I want to clear up some confusion about the two types of advertising. Both receive the “Sponsored” designation next to the content of the advertisement, but these are two very different types of advertising in the Facebook universe.

When Facebook launched the Promoted Post feature for brand pages, it created some confusion for people doing ad buying. The feature appears as a Promote button attached to any status update you make on a brand page. From $5-50, you can increase the reach of your post by getting it in front of more people who previously liked your page.

I say this is confusing because a number of Facebook page managers assume that if someone likes their page, that person will see updates about the page in their news feed. The reality is that people who like a page stop seeing updates in their news feed if they aren’t interacting. A Promoted Post is a way to get the post in the news feed of fans who are no longer seeing your updates.

When you run a Promoted Posts campaign, the post appears in the news feed of fans who are no longer engaged. The same story will also appear organically for anyone who is engaged with your page.
Based on my own experience with Promoted Posts (and the stats that show additional views), Promoted Posts increase the number of times the same person is presented with a post, because the total number of views for a Promoted Post always exceeds the total unique views. 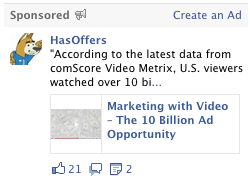 Sponsored Stories are Facebook Ads that appear in the same places Facebook inserts other ads throughout the site. While they can be specific to your Facebook page, we primarily focus on promoting individual posts from our page. You can see the example Sponsored Story used in compiling the data for this post to the right.

Aside from the obvious difference in appearance and placement, Sponsored Stories are also different in terms of targeting. Promoted Posts go to people who clicked Like on your page. Sponsored Stories appear for people based on the targeting criteria you set up. Some of the people who see your Sponsored Story could be existing fans, but all of them will fit the target demographic you define. A Sponsored Story campaign will also be shown to targeted Facebook users multiple times throughout the course of your campaign, increasing the exposure per user.

Cost per click for the Sponsored Story was a little less than half the CPC for the Promoted Post. 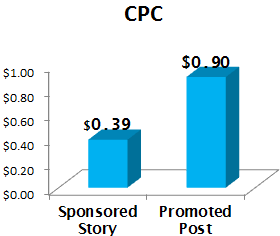 Targeting people based on interests remains the most effective way to capture engagement. The only area where the Promoted Post outperformed the Sponsored Story was in Social Reach. This makes sense because there are many people who Liked the page who are friends. Social Reach is only valuable if it increases engagement, which appears to be unlikely considering the outcomes of both campaigns.

If you include Actions, which are page likes, link clicks from the page (not from the ad), and page post likes, the CPC difference is even greater. The Promoted Post comes in at $0.50 CPC, while the Sponsored Story is a mere $0.15. Once again, I’m left with strong evidence that Promoted Post campaigns are far less effective than any other advertising mechanism available on Facebook.